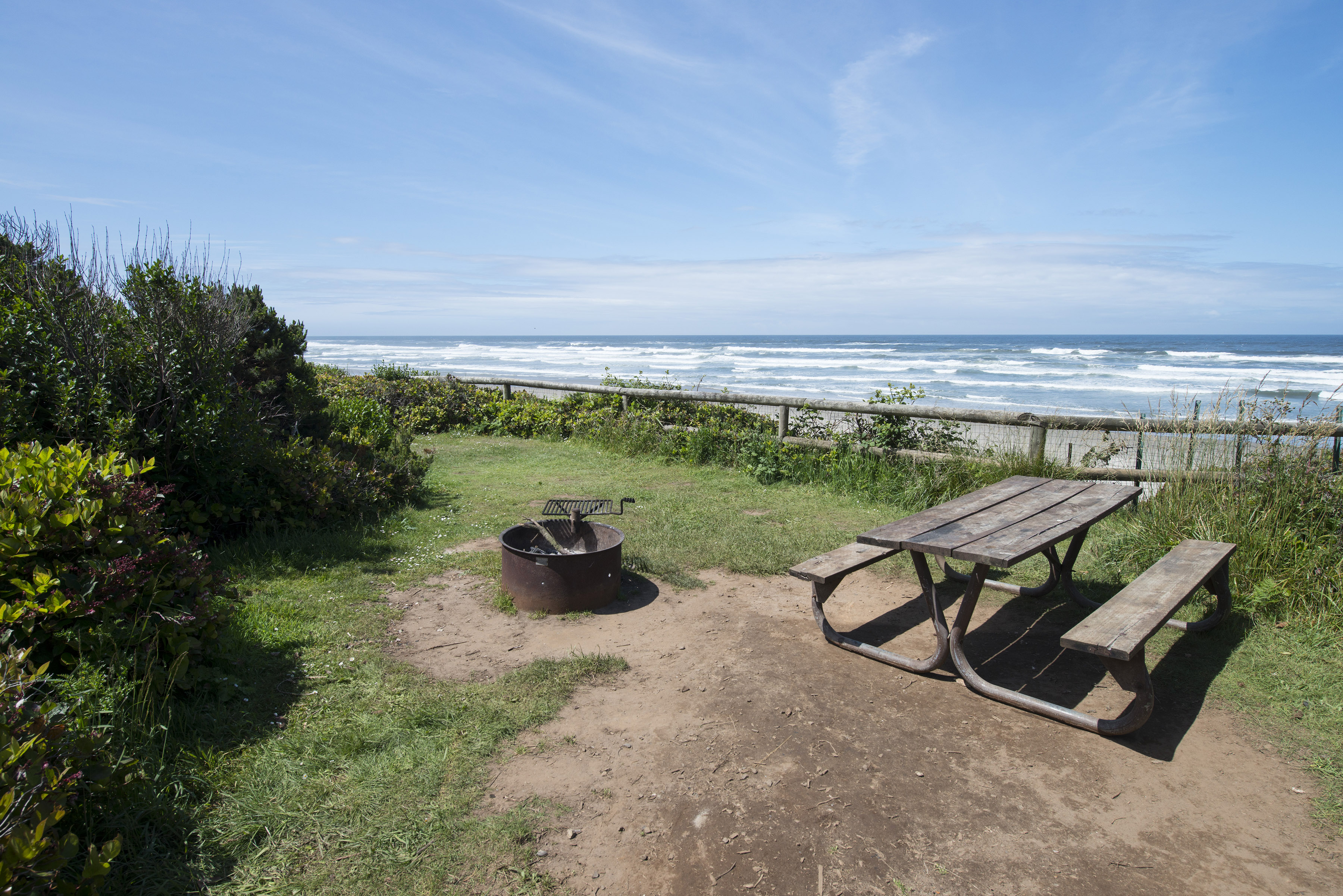 The landscape of the Oregon Coast is one of my favorites, with the rocky forest that meets the sea. It remains comparatively untouched to the California coast–sparsely populated and not impacted by houses brimming the cliffs.

Where we stayed – Carl G. Washburne Memorial State Park. This campground has 7 first-come, first-served sites. Tucked on the east side of Highway 101, our campsite was under the ultimate tree canopy (to the point where we had to watch for falling branches). Even though we were in the center of some campsites, we felt completely secluded (my kind of camping!). 3 tents fit perfectly in this space, and we probably could have fit a few more.

Where we hiked – Valley Trail to Hobbit Trail/Heceta Head Trail, accessible from the Carl G. Washburne Campground. First you’ll come across Hobbit Trail, that will take you down through a vine canopy to the beach. If you go back and continue on the trail further, you’ll experience sweeping views of the Oregon Coast through towering trees. Around 2 miles you’ll make it to the Heceta Head Lighthouse and Heceta Head Beach. We made this a one-way trek and met the boys who were surfing at Heceta Head Beach. 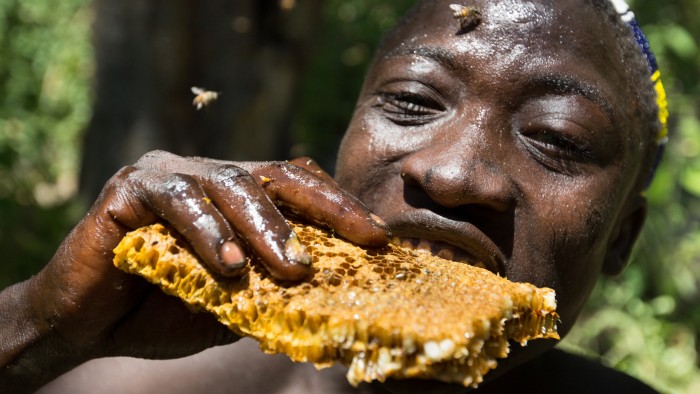 I’ve been looking for a way to incorporate more leafy greens into my diet, to compliment my increasingly meat-centric meals.  This stir-fry is the perfect thing for when you want a warm and healthy meal.  I feel like the secret ingredient (which might be completely normal and not a secret at all) is the sugar snap peas.  They add a nice bit of crunch and work nicely with all of the other ingredients.  Option to start off with your favorite protein and work in the vegetables, or to pair with (my favorite), baked chicken wings!

Happy Thanksgiving from yours truly and the cooked turkey!  This morning started off with a fun Turkey Trot 5k and a PR (recap later).  Right now I’m in the midst of cooking.  This year, instead of improperly cooking a bird again (specifically a duck), we’re going untraditional with cioppino, pumpkin parmesan bread rolls and caramel apple crumble with pumpkin ice cream.  And 8pm we’re heading out to  jk, watch Catching Fire.

Are you Black Friday-ing, or rather, or shopping in the event that has taken over Thanksgiving (I’ve heard it’s now called “Gray Thursday”)?  I am under the impression that Black Friday is a hoax. A scam. A myth.  The one time I participated in Black Friday was my junior year of high school.  My family was down visiting my aunt and uncle in SD for Thanksgiving and my brother and I convinced our parents to take us to Circuit City (?) at 4:30am.  So we waited and waited, and once we got in, the one thing we wanted was sold out (or just not there)!  I mean come on, it wasn’t even a big ticket item…and now looking back I don’t know why it was pertinent we tried to buy it on Black Friday.  That was my one Black Friday experience that proved Black Friday’s do not exist.  Scoring anything is about as mythical as man-bear-pigs (oh wait, I kind of have one of those with my cat-bear-sheep-rat-shark-dog).

And if you’re wondering, yes, I did eventually get my desired Black Friday item at full price…a pink Nintendo DS and Nintendogs…lawlz.

Have you Black Friday-ed?  Slash are you going to this year?…

The first time I hiked Green Lakes, it was an early morning during mid-summer. While I was only hiking, I remember seeing trail runners and thinking it would be a great trail to run. We started at the Green Lakes trailhead, and once we got to the Green Lakes campground, continued on the Soda Creek Trail, that would eventually loop us back to the trailhead/parking lot. Originally we were looking for the trail to reach Broken Top summit, but couldn’t find it. This hike was very green, and butterflies were abundant (especially on Soda Creek Trail).

Fast forward to late September, when I felt like doing a solo trail run and thought Green Lakes would be a great option. We had just experienced our first snow dump in the mountains. However, I didn’t know how Green Lakes would be affected. My trail run ended up being probably less than a half mile, before I came across mushy ground lined by ice. I thought it would clear up eventually, but soggy dirt turned into slippery ice that turned into deep snow. This trail follows Fall Creek, where you’ll encounter some waterfalls (one of my favorite things about Oregon is that there is no lack of waterfalls). It’s a fairly mellow/moderate hike, with only a few switchbacks towards the very end. On the last stretch you’ll be required to jump a few rocks across some streaming water. Once you reach Green Lakes, you will have stunning views of Broken Top and South Sister.

I found this hike to be entrancing, especially in the snow. Since the snow was fairly fresh and other trails weren’t well identified (and I was also only wearing trail running shoes), I decided to make this an out-and-back hike and return the way I came from.

This past Tuesday (October 22) I took the 3 hour (with traffic) drive up to Santa Monica from SD. The day started out cloudy, but the sun eventually broke through beautifully.

FitBlog LA was the biggest celebrity shock I’ve received; from Tony Horton, Alyse Levine, Harley Pasternak, to some of my favorite blogger idols.

Previous celebrity excitements have included witnessing the top of Kim Kardashian’s sock bun at the SD Zoo, yelling at Michael Cera through a tent at ComiCon and kissing the cheek of who would years later become “VH1’s America’s Most Smartest Model” at a Maroon 5 concert when I was 15. What can I say? I try hard.

All of these celebrity sightings/experiences added together do not even come close to the excitement of sitting in the same room as Skinny Runner, Run Eat Repeat, Blogilates and Eco Vegan Gal (I still need to check her out!). I feel like these bloggers are “tangible celebrities,” because you feel like you know them, and you know you could run into one someday.

Other amazing and informational speakers included:

Tony Horton – The New Way to Workout
Tony Horton was ridiculously vascular. And 55. He talked about the HIT trend (working multiple body parts at once).

He believes in the combination of intensity (6-8 on a scale of 1-10), variety (working outside your comfort zone) and consistency (schedule 7 a week with room to miss, but get at least 22 workouts a month)…basically P90X.

If you focus on skill (such as exercises with a bosu ball, stability ball, and/or medicine ball) your functional fitness will increase, and before you know it, you will have reached your fitness goals.

Some other interesting points: 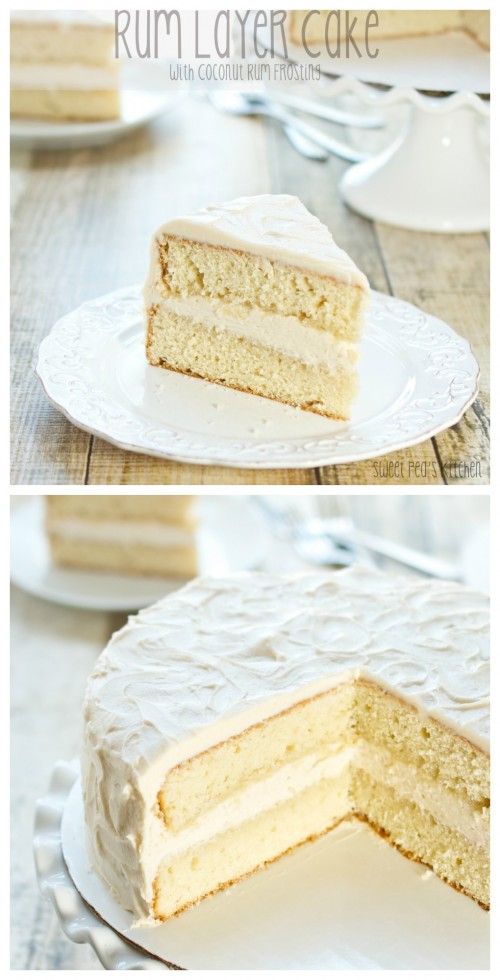 For Lauren’s Sweet 16, I was inspired by the coconut cake served at Solace and the Moonlight Lounge (her favorite). The inspo: Coconut Cake with Rum Caramel Sauce, Sugared Macadamia Nuts, Cream Cheese Frosting.

I used the cake recipe from Beth Cakes Triple Coconut Rum Cake paired with the Homemade Cream Cheese Buttercream Frosting from Living Well Spending Less. The whole cake turned out super dense, and I kid you not, probably weighed around 20lbs because I didn’t end up leveling the layers.  The flavor made it taste like a humongous coconut macaroon.

For decor, I used a big rhinestoned “16” Jen purchased from Amazon and a variety of pink roses. Fresh flowers have been my favorite decor lately. They dress up a cake without requiring a steady or artistic hand for some ingenious floral frosting.… 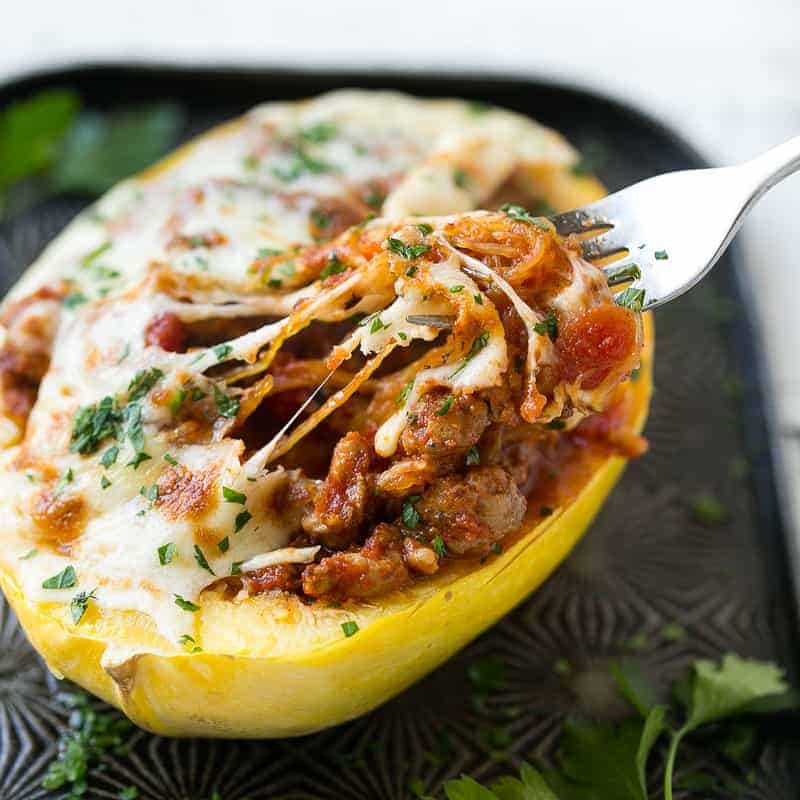 If I was auditioning to be the Next Food Network Star and needed to have a P.O.V. (point of view) mine would be: simple, flavorful and healthy.  Short prep time, good.  Few ingredients, better.  Not laden with calories, most excellent!  This recipe is all 3: simple, flavorful and healthy.  Although it did leave me hangry for some dessert afterwards…my sweet tooth is a whole other story 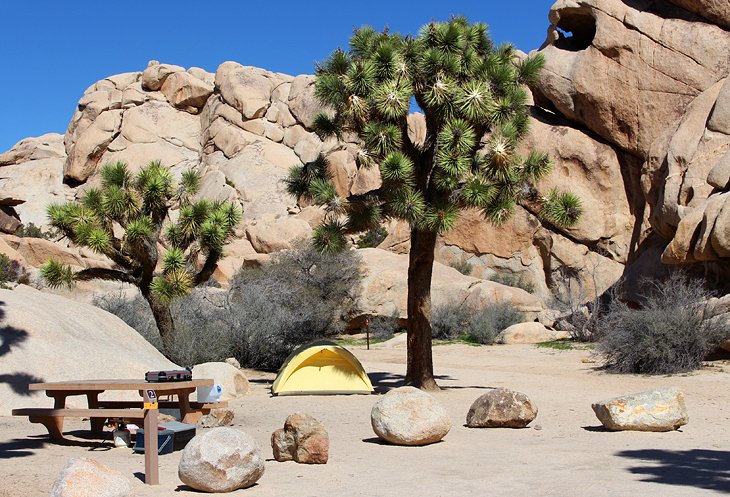 Where do you camp when all the campgrounds are full in Joshua Tree?

With no real plans except for a few campsites in mind (e.g. White Tank, Jumbo Rocks) Kevin and I arrived at Joshua Tree National Park late on Saturday afternoon to a full park.

We were informed that the only campground with open sites was Cottonwood.  However, Cottonwood was 30 miles away within the park, basically at the South entrance/exit.  So instead, we decided to weigh our options and scout out the backcountry sites.

I had read of BLM (Bureau of Land Management) camping which is free and primitive camping outside the National Park (and from what I’ve read quite desolate).  However, we found out that you can do dispersement camping (pack-in, pack-out) at designated Backcountry Boards inside the park.  These are located throughout the park (look on the map for the blue B’s).  All you need to do is find the Backcountry Board, and fill out a free permit that basically provides the information for your car (so you can park overnight) and some accountability for yourself going out there.  The only real restriction to backcountry camping is that you must be 1 mile from the road and 500 ft from any trails.

After driving through the White Tank campground and realizing that even though all of the sites are divided by huge boulders, there is still a lack of privacy.  Going off the grid was exactly what we both wanted, needed and liked (camping is all about isolation!).  We ended up using the Twin Tanks location (you can see 12 other spots within JTNP here).  With just enough time to carry 2 loads from the car (we’ve worked on condensing since our first dispersement camping experience) and set up camp, we took a hike to the nearest … 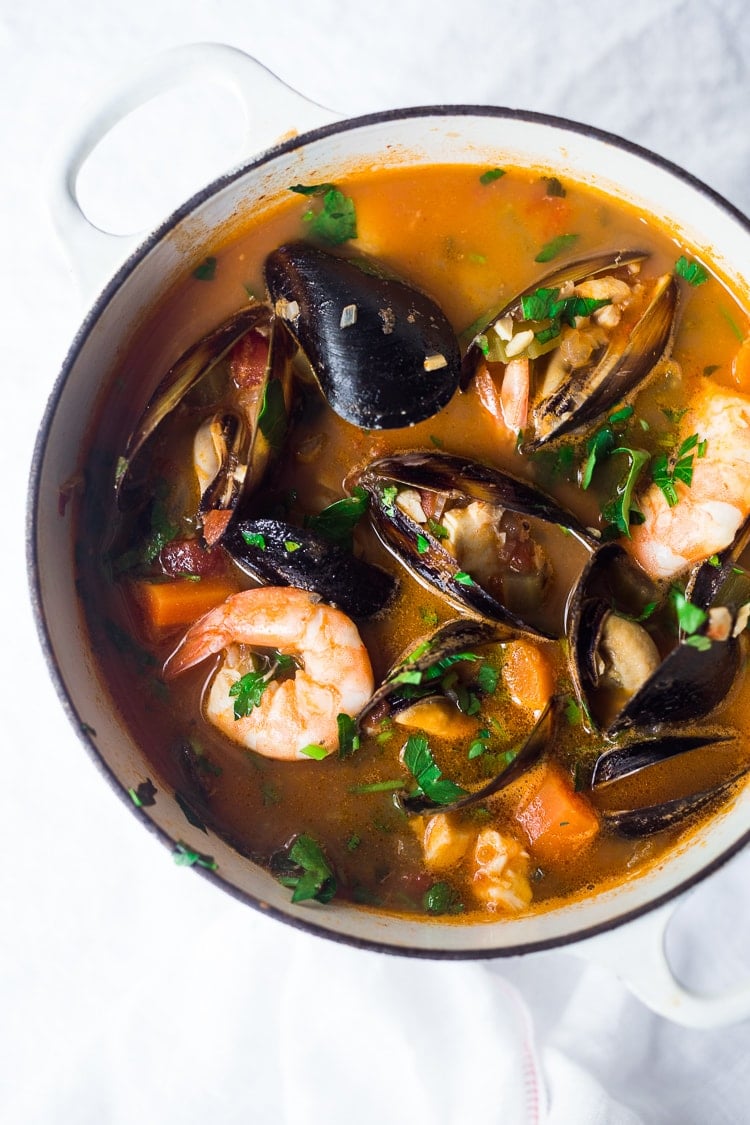 I know it’s the 2nd of December, but let’s finish up the “Three Things: November.”  For my last thing, I wanted to “cook something new,” specifically, cioppino.  Originally, I thought this would be something that would take all day; that’s why I set my sights on Thanksgiving (side note: it didn’t take more than maybe an hour and a half).  As a result of this decision, my Thanksgiving was the most unconventional thus far.  No turkey. No stuffing.  No sweet potatoes.  No pumpkin pie.  However, it did produce the best leftovers known to mankind…or maybe just me, since I am the cioppino fiend.  Everything was amazing, and for once I didn’t feel stuffed to the brim, or sleep-induced by tryptophan. 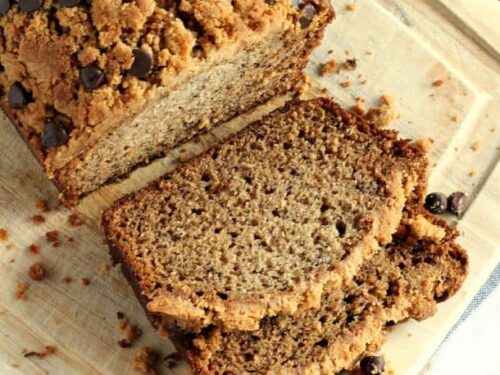 For a while, I was on the Pinterest hunt for the best banana bread. And I think I just about found it. To me, the best thing in this world, on anything (besides ice cream), is a streusel topping. Pair that with a filling of layered chocolate chips and spiced banana cake, and you have yourself a win (or the best banana bread!).  Bake this in a disposable banana bread mold, wrap in cellophane and tie up with some bakers twine, and this makes the perfect holiday/housewarming/birthday gift!